Veganism is a practice and way of life that abstains from exploiting animals. A vegan diet abstains from the use of animal products, meaning no meat, eggs, or dairy.  A vegan lifestyle includes compassion not only through your diet but also through everything you do.

Ahimsa means non-violence in Sanskrit, and signifies a notion of non-harming towards others as well as to yourself.
It has a deeper application than just non-violent actions, but it also encompasses non-violence in our mind body and spirit.
Ahimsa was one of Mahatma Gandhi's key doctrines, and one of his greatest quotes was: "The greatness of a nation and its moral progress can be judged by the way its animals are treated"... and he also wisely said, "Be the change you want to see in the world".
Be kind, loving, non-judgmental with all, and take small steps in your own life to make the planet a better place for everyone.

This website is a supporter of the vegan and ahimsa values, and we are excited to showcase their beauty. We are taking initiative, and we are also encouraging you all to be the positive change we want to see in our world. Let peace and compassion prevail :)

Here are some fundamental questions to think about:

Why VEGAN? Veganism, the natural extension of vegetarianism, is an integral component of a cruelty-free lifestyle. Living vegan provides numerous benefits to animals’ lives, to the environment, and to our own health–through a healthy diet and lifestyle.

For the Animals
Despite the common belief that drinking milk or eating eggs does not kill animals, commercially-raised dairy cows and egg-laying chickens, whether factory-farmed or “free range”, are slaughtered when their production rates decline.(1) The same factory farm methods that are used to produce most meats are also used to produce most milk and eggs.(2) These cows and chickens live their short lives caged, drugged, mutilated, and deprived of their most basic freedoms.

As with any mammal, cows produce milk only when pregnant and stop after their calves have been weaned. When a dairy cow delivers a female calf, the calf becomes a dairy cow herself, born to live in the same conditions as her mother. But when a dairy cow delivers a male calf, the calf is sold to a veal farm within days of birth, where he is tethered to a stall, deprived of food and exercise, and soon slaughtered for meat.(6) Life is only a few years longer for the mother. Because it is unprofitable to keep cows alive once their milk production declines, dairy cows are usually slaughtered at 5 years of age.(7) Thus, a cow’s normal lifespan of 25 years is cut 20 years short just to cut costs and maximize production.

On U.S. farms, an average of 7 egg-laying hens spend their entire lives in a battery cage with a floor area the size of a vinyl record cover.(3) Living on wire floors that deform their feet, in cages so tiny they cannot stretch their wings, and covered with excrement from cages above them, these chickens suffer lameness, bone disease, and obsessive pecking, which is curbed by searing the beaks off young chicks.(4) Although chickens can live up to 15 years, they are usually slaughtered when their egg production rates decline after two years. Hatcheries have no use for male chicks, so they are killed by suffocation, decapitation, gassing, or crushing.(5)

Today’s farms are not like the ones most of us learned about in school; they are mechanized factories where an animal’s welfare is of little concern compared to profit. Veganism emerges as the lifestyle most consistent with the philosophy that animals are not ours to use. 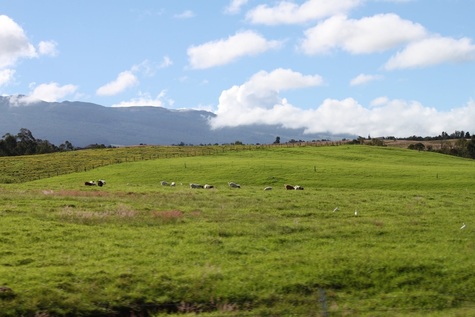 For the Environment
Animal agriculture takes a devastating toll on the earth. It is an inefficient way of producing food, since feed for farm animals requires land, water, fertilizer, and other resources that could otherwise have been used directly for producing human food.

Animal agriculture’s dependence on higher yields accelerates topsoil erosion on our farmlands, rendering land less productive for crop cultivation, and forcing the conversion of wilderness to grazing and farm lands.(8) Animal waste from massive feedlots and factory farms is a leading cause of pollution in our groundwater and rivers.(9) The United Nations Food and Agriculture Organization has linked animal agriculture to a number of other environmental problems, including: contamination of aquatic ecosystems, soil, and drinking water by manure, pesticides, and fertilizers; acid rain from ammonia emissions; greenhouse gas production; and depletion of aquifers for irrigation.(10) 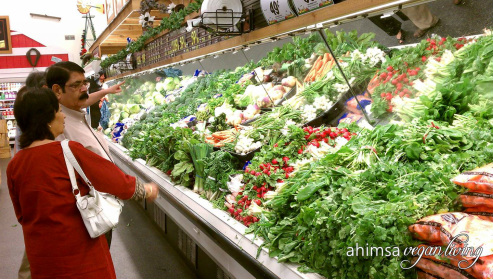 For your health
The consumption of animal fats and proteins has been linked to heart disease, colon and lung cancer, osteoporosis, diabetes, kidney disease, hypertension, obesity, and a number of other debilitating conditions.
Cows’ milk contains ideal amounts of fat and protein for young calves, but far too much for humans. And eggs are higher in cholesterol than any other food, making them a leading contributor to cardiovascular disease. The American Dietetic Association reports that vegetarian/vegan diets are associated with reduced risks for all of these conditions.

Vegan foods, such as whole grains, vegetables, fruits, and beans, are low in fat, contain no cholesterol, and are rich in fiber and nutrients. Vegans can get all the protein they need from legumes (e.g., beans, tofu, peanuts) and whole grains (e.g., rice, quinoa, corn, whole wheat breads and pastas); calcium from broccoli, kale, collard greens, tofu, fortified juices and nut milks; iron from chickpeas, spinach, pinto beans, and soy products; and B12 from fortified foods or supplements.

With planning, a vegan diet can provide all the nutrients we need without any animal products.

For more on the health benefits of vegan diets, visit: Physicians Committee for Responsible Medicine
For more on vegan nutrition: veganhealth.org   theveganrd.com


Is a vegan diet healthy?

As with any diet, a vegan diet requires planning. However, when properly planned, a vegan diet can be considerably healthier than the traditional American diet. In its 1996 position paper on vegetarian diets, the American Dietetic Association reported that vegan and vegetarian diets can significantly reduce one’s risk of contracting heart disease, colon and lung cancer, osteoporosis, diabetes, kidney disease, hypertension, obesity, and a number of other debilitating conditions. Cows’ milk contains ideal amounts of fat and protein for young calves, but far too much for humans. And eggs are higher in cholesterol than any other food, making them a leading contributor to cardiovascular disease.   Vegan foods, such as whole grains, vegetables, fruits, and beans, are low in fat, contain no cholesterol, and are rich in fiber and nutrients. Vegans can get all the protein they need from legumes (e.g., beans, tofu, peanuts) and grains (e.g., rice, corn, whole wheat breads and pastas); calcium from broccoli, kale, collard greens, tofu, fortified juices and soymilks; iron from chickpeas, spinach, pinto beans, and soy products; and B12 from fortified foods or supplements. With planning, a vegan diet can provide all the nutrients we were taught as schoolchildren came only from animal products.

Will I get enough protein?

Virginia Messina, MPH, RD, and Mark Messina, PhD, recommend that vegans receive 0.4 grams of protein per day for every pound of healthy body weight. If a vegan consumes adequate calories and eats a variety of foods, it is very difficult not to get enough protein. This is true for athletes as well. One need not combine foods at each meal to get “complete protein. “  The most important plant sources of protein are legumes, soy foods, and nuts. Grains and vegetables also contain significant amounts of protein. Eat a variety of protein sources throughout the day: e.g, a legume (such as beans, tofu, or peanuts) combined with a grain (such as rice, corn, or whole wheat breads or pastas). For more information, visit Veganhealth.org

There has been much debate as to what plant foods supply an adequate source of B-12. Many products that were once thought to be adequate, such as tempeh, are no longer considered so. Fortunately, there are easy solutions for vegans. Vegetarian B-12 vitamin pills are available at most drug stores; the ‘sublingual’ form is preferable. In addition, some foods are fortified with B-12, including Red Star Nutritional Yeast.  It is essential to include a B12 supplement in your diet or eat foods that are fortified with B12 to insure that you receive the proper amount of B-12. For more information, read What Every Vegan Should Know about Vitamin B12